How to choose the best passive solar house plan?

How to choose the best passive solar house plan?

Solar house plans. Living in a house designed for the sun’s race provides a very high quality of life, reducing the use of artificial lighting as well as heating costs by almost 25%. All this without adding additional construction costs .

The design of passive solar houses is relatively simple and does not rely on technologies, it is essentially a question of positioning the window well in relation to the sun, of dimensioning the glazing well and of distributing the heat well in all the rooms.

Solar houses: The race of the sun

In general, it must be remembered that the sun rises in the East, that it is in the South at noon and that it sets in the West.

When planning the rooms of a house you can decide to want to wake up in the morning with the sun or on the contrary not to have sun in your room before 6:00 p.m. in the evening.

These decisions must be made based on your lifestyle. Early risers enjoy the sun in the bedroom and kitchen in the morning to leave the day with the energy of the sun. Natural light has a strong influence on the mood of some people especially during the winter months when the day is short.

THE EXAMPLE AGAINST shows an arrangement designed for a facade located on the North-West side. Solar energy neophytes often believe that you have to have a fully glazed side of the house on the south side to benefit from a solar contribution.

Theoretically, it is actually a question of positioning around 50% of the glazing on the south side, 20% on the East and West sides and around 10% in the North.

In this way the house will be less likely to overheat in the presence of the sun and the brightness will be more pleasant.

But in real life, it is rare that the facades are frankly on the North, West, East or South side. It is therefore often preferable to choose a house plan with two highly glazed sides in order to benefit from a certain flexibility in the orientation of the facade. 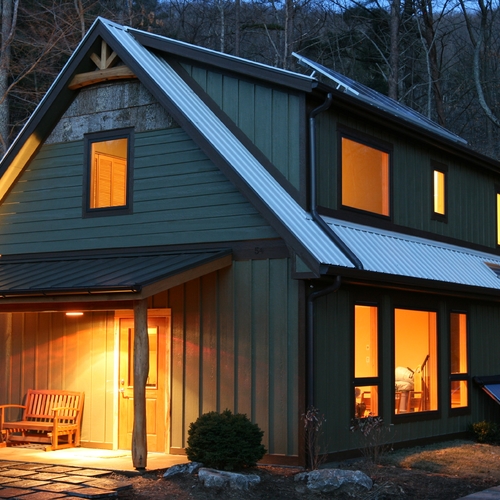 For natural light and sight

When looking for their ideal land, owners interested in building passive solar houses mainly seek land with the best view on the south side in order to benefit from the sun, light and sight.
You don’t have to be so drastic in choosing the land to reap the benefits of a passive solar home. Using abundant windowing on two sides of the house with a slight change in orientation achieves good energy results while emphasizing the quality of light and sight.

THE EXAMPLE above is an excellent concept of naturally well-lit cuisine with an open view of the outside.

A well of light ?

In some cases, the light shaft becomes the most interesting solution when you have to position the kitchen on the north side of the house for questions of views or interior design.

The light shaft can give a large brightness to a room with or without sun. However, it must be very well constructed to avoid the problems of condensation and water infiltration. These works should not be left to simple door and window installers, look for light shaft specialists.

Anyone who has been a little interested in passive solar houses has heard of the importance of thermal mass that stores solar heat during the day to restore it overnight. However, few people know that the thermal mass must be relatively dark in color and exposed to the sun to be able to absorb this heat quickly. The house temperature must also drop below 18’C overnight before the thermal mass radiates its heat.

Contrary to the beliefs often conveyed in the media, houses with a significant thermal mass do not save energy because they are not more insulating. They only take longer to warm up and longer to cool. In this sense, avoid thermal mass in an occasional secondary residence because it will take two days to warm up after your arrival.

To be comfortable, passive solar homes mostly need a good central air distribution system to balance local overheating across the house. The second important element is the quality of its insulation and airtightness to keep the heat saved.

In general, except for isolated basement floors, avoid the thick thermal mass for floors because they will always be cold to the touch. Unless of course, if you have radiant heating …

Choose your level of solar construction

Solar houses are essentially distinguished from other houses by their design according to the race of the sun. Solar house plans must first suit you both for aesthetics, sight, natural light and comfort, and for the functionality of the layout and the pleasure of living. Nobody wants to go live in a heating system, even an ecological one.

In solar homes as in others you can have multiple levels of efficiency.
Level 1 = passive solar + standard construction (short-term economic)
Level 2 = passive solar + higher energy efficiency (the most economical in the long term)
Level 3 = Level 2 + autonomous energy production of electricity by photovoltaic sensors and production of hot water by active solar collectors (applies mainly in places far from public services).

For a good design of your passive solar home, consult us before making your plans or bring your plans to modify them according to your terrain and orientation.